Pump manufacturer Tsurumi is one of the first companies to have all of its aeration equipment tested to the new EN 12255-15 European Standard. EN 12255-15 applies to wastewater treatment plants and covers specifically the measurement of the oxygen transfer in clean water in the aeration tanks of activated sludge.

The new standard replaces older standards and unifies them under one common directive. Daniel Weippert, General Manager for Tsurumi Europe, says the testing was a challenging but worthwhile exercise.


"We began our testing of equipment to this new standard at the earliest possible opportunity to ensure there would be no confusion or misunderstanding among our customer base," he says. "Our customers want to know that when they buy from Tsurumi they are getting the very latest equipment both in terms of technology and in terms of regulation. This was an expensive and time-consuming exercise on our part but we are proud to be among the first to have all our equipment correctly tested."


To conform to EN 12255-15 equipment needs to have its oxygen transfer rates measured under defined standard conditions. These conditions specify that the oxygen should pass through an aeration tank filled with clean water. The water should be at a temperature of 20˚C and at sea level altitude (atmospheric pressure of 1 atm).


The testing of the new Tsurumi aeration equipment was performed over a period of more than two years. To be absolutely certain that it conformed to the high European standards, Tsurumi built a new and innovative testing ground at its factory in Kyoto, Japan. The new facility includes a purpose-built testing-basin with changeable dimensions up to a size of 10 m by 10 m and a maximum depth of up to 6 m.


Not all manufacturers of aeration systems are publishing their oxygen input rates according to the new EN-norm and this is causing confusion says Daniel Weippert.


"Oxygen input rates measured according to older standards are often much higher than those taken in accordance with EN 12255-15," he says. "So it may appear that a particular system has an input advantage over another system. This means the onus falls on customers to make sure when they are specifying aeration equipment that it is tested to EN12255-15. Testing this way is the only true way to compare different systems and different manufacturers." 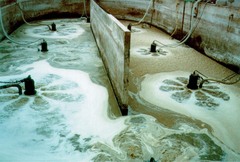